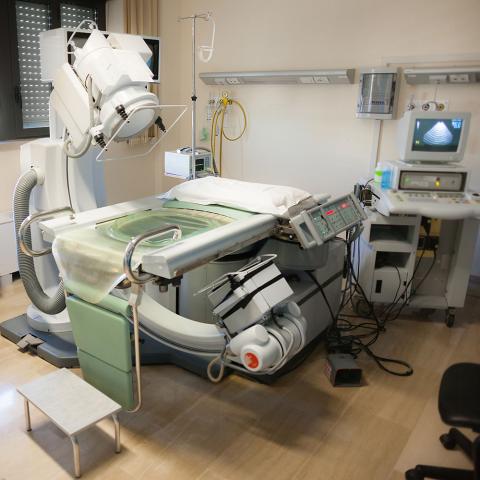 The procedure is performed in a Melbourne hospital under a general anaesthetic, usually as a day case. The stone position is identified using an ultrasound machine which is attached to the ESWL machine. The stone is then treated with individual “shock waves” each taking about half to one second. A total of 2000 – 3000 shocks are generally used to fragment a stone and this takes 30 – 45 minutes.

What to expect after ESWL

After ESWL, stone fragments need to pass naturally out of the kidney, down the ureter and through the urethra (water-pipe). Usually this passage of fragments does not cause pain as the pieces are small and do not cause any blockage while passing down the ureter.

Following ESWL many patients will see some blood in the urine for a few days and many will notice bruising in the loin with usually only mild discomfort.

EWSL is extremely safe. Despite the energy being sufficient to break many stones, the kidneys are very rarely harmed at all. The risk of damaging other structures or organs with ESWL is extremely low.

One of the advantages of ESWL is that patients usually do not require a ureteric stent post treatment. Stents can be irritating and many patients find them uncomfortable. See Ureteric Stent

The biggest disadvantage of ESWL is that some 25% of stones do not break at all or break into large pieces which do not pass out. Occasionally following ESWL a fragment tries to pass down the ureter but gets stuck resulting in obstruction and severe pain called renal colic. This may well require hospitalization and sometimes a procedure to retrieve the fragment with a telescope (ureteroscopy).

If ESWL is only partially successful at eradicating a kidney stone, it may be possible to treat the stone again with ESWL. If a stone is found to be completely resistant to fragmentation with ESWL, other treatment options such as ureteropyeloscopy need to be considered.